I want it to be clear that no one rocks the X chromosomes like I do, but there are some stereotypically female things that leave me confused. I obsess about my hair and squeal over shoes as much as the next cliche, but things like “applying lipliner” and “understanding emotions” are sort of beyond me. Because I missed some important female lesson at some point, I get all my relationship advice from Google.

Tuesday, I was asking Google how to flirt and every result was from Cosmopolitan, the magazine for fun, fearless females. If you’ve walked past a magazine rack in a grocery store and you have eyeballs, you know that Cosmo’s advice can be crazy. Not fun, you-never-know-what-your-girlfriend-will-do-next crazy. The your-girlfriend-is-going-to-stab-you-in-the-face-in-your-sleep kind of crazy. Nevertheless, there are girls out there who live and breathe Cosmo. If sex sells, a thousand different euphemisms for it plastered on a pink cover must sell a thousand times as well.

I skimmed Cosmo’s flirting tips and then had the worst idea of my sweet, short life so far. (Don’t worry. There will be more.) I had to write an opinion column for the school paper by the weekend. What if I spent the entire week doing every single thing an issue of Cosmo suggested, and wrote about my experience? Surely I’d learn something from it.

I made it three days before I had a mental breakdown. You can read the whole article here, but there was no way to fit the entire story into a single column.

Cosmo hates everyone. The first day of my Cosmo immersion, I was ready to tell anyone who asked that Cosmo hates women. Their “empowering” suggestions all seem to involve being naked. Cleaning my house naked sounds potentially painful and awkward for the other people who live there, and I don’t think it’s going to break any glass ceilings. If my house has glass ceilings, all the more reason not to clean it naked.

On the second day, I started to wonder if Cosmo hates men more. There are some legitimate articles in the magazine that could help women, like how to avoid melanoma and rape, but many articles begin with some iteration of, “Here at Cosmo, we love men, but…” It’s like the obligatory “I’m not a racist, but…” at the beginning of most racist statements. To Cosmopolitan, men are not people. They’re sex drives with the mental complexity of amoebas. Cosmo Girls match their boyfriends with their shoes, which I assume means white boyfriends are out after Labor Day.

Cosmo Girls do not sleep. The issue I borrowed suggested that getting 10 hours of sleep was healthy. I had to get up two hours before work the first morning to fit in a flat, sexy abs workout, making my eyeshadow look like a sunset, and doing my hair. Cosmo Girls have careers, of course, so that’s eight hours to work, eat sexy, healthful food, and do some Kegels. After all that, there’s only four hours left in the day. Since the bulk of Cosmo is sex tips, I assume most Cosmo Girls fill this time with some hot lovin’. (And it’s only heterosexual lovin’. There are no tips for Cosmo Girls who like other Cosmo Girls.) Since I remain steadfastly alone in this world, I used those four hours to eat things that couldn’t be described as an aphrodisiac and nap, because it turns out I wasn’t born with it. It’s definitely Maybelline. 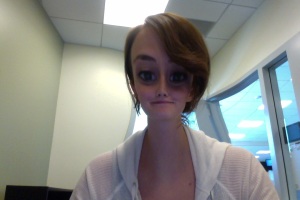 Me without makeup. Now you know.

Cosmo Girls get weird reactions. When I told people what I was doing, everyone reacted differently. A lot of people stared at me for a couple seconds and then said, “You know Cosmo is mostly sex, right?” So I’d explain the whole “I’m skipping that part because I’m a cat lady” thing, and they would think for a few more seconds and say, “What are you going to do, then?”

My friends were enthusiastic about it. One wanted to do it with me. One told me how to get a fake tan and offered to do my makeup. One friend walked past me in the cafeteria and sat down across the room, facing me. He didn’t notice I was there because I didn’t look like me. People would comment on my hair or my perfume. I realized I would rather smell like nothing than smell good, because at least no one points it out.

By the third day, I was tired of explaining to people why I was dressed the way I was. Instead of informing them that stripes are in this season, I’d mutter things like, “Well, you know. Fergie.”

Cosmo Girls think everything is sexy. As Cosmo suggested, I set my alarm so it played a song that reminds me of a steamy encounter. Unfortunately for me, this meant every morning I woke up to ska punk, which is not sexy or fun at 7 a.m. I was told to keep my lotion in the fridge so I felt sexy and cool when I put it on. This made opening my fridge in front of friends weird. My abs were supposed to be sexy. My potpourri was supposed to be sexy. You know how the new Smurf movie took a lot of flak for using the word “Smurf” as every part of speech? Cosmo has been doing that for years with “sexy” and no one has batted an eyelash. I take that back. A lot of eyelashes were batted, but only because Cosmo said it would attract men.

…I guess I can cross Cosmopolitan off my list of potential post-graduation employers.