P.S., A true friend of mine would subscribe to Life and Steph. Hint, hint.

I was listening to a podcast the other day (I know we just started this post, but let’s take a quick tangent here. It is so cool that this is the future and I can use my tiny pocket computer to order a radio program down from the sky and play it anywhere I want, any time I want, and it’s called a podcast. That sounds like something straight out of a science fiction novel, and not like something that occasionally lulls me to sleep, resulting in me drooling on my tiny pocket computer. OK, back to the thing.) and the guest said that being in your 20s is like a second puberty.

Good thing I dodged that bullet, I laughed to myself, picking at one of several zits that recently appeared on my chin.

I was still thinking about it the next day. Being in your 20s isn’t like second puberty at all, I said aloud to the cats while browsing online stores for clothes that would finally make me cool.

This is me now.

I can’t even imagine going through that horrible nightmare again, I thought two days later, doing my best not to burst into tears about nothing at all. I was having the weirdest sense of déjà vu.

Finally, halfway through a meal that consisted of everything in my kitchen, I had an epiphany. Hey, I thought. This is totally crazy, but I’m starting to think that being in your 20s might be like going through a second puberty. Actually, that would explain a lot.

I had a lot of coping mechanisms for Puberty #1, as I recall.

I seem to remember that not one of these strategies worked. A few of them made puberty even more frustrating (looking at you, passionate crush on 1986 David Bowie.)

Unfortunately, I think the only way to get through the horrible, soggy marsh that is pubescence is to age out of it. I remember counting the days until I turned 18, because then I’d be free. (That’s not how it works, of course, but it gave me hope in my darkest, most poetry-heavy hours.)

If you look closely, you can see this spaceship’s podcast.

We haven’t been able to use my house’s back door for two days, ever since I broke it during a stressful video shoot for work that ran until midnight. This means that my roommate and I can only use the front door until I can get to the hardware store and set aside time to install a new handle and lock. Normally this would only be a medium-sized inconvenience, but not this week. This week Benito, the cat we just adopted, is lying in wait on the other side of that door, waiting to pounce on our heads and bounce away forever. Also waiting behind the front door: the awful, awful stench that Benito brought into our home with him. (Thanks, testosterone!) 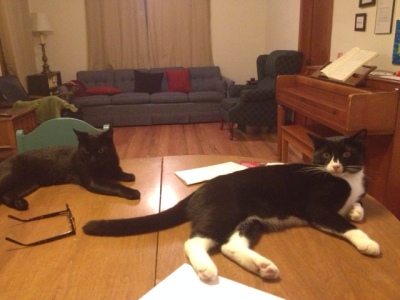 END_OF_DOCUMENT_TOKEN_TO_BE_REPLACED

In sixth grade, I transferred to a new middle school. My classmate, Kyle, was the only other person who transferred from elementary school with me, and while we got along, we didn’t have a ton in common. At recess the first day, Kyle left with a group of boys to play football and I sat down on a bench and stared at the dirt.

After about five minutes, a girl from my class sat down next to me. “I’m Alissa!” she said.

“I’m Stephanie,” I said. We both stared at the dirt.

“Can you see those ants?” she asked. “Sometimes I feel like I have some kind of super bug vision because I can zero in on them no matter where I’m looking.”

“I see a lot of bugs, too!” I said, and suddenly we were friends. We had sleepovers and played foursquare during recess, and when I moved to Hawaii at the end of the semester, she wrote me letters at my new address. Ants can lift 20 times their body weight and bring people together.

END_OF_DOCUMENT_TOKEN_TO_BE_REPLACED

When I was four, I had a conversation with my best friend’s brother, who was a few years older than us. I don’t remember how it started, but I do remember that he was bragging about all the cool things older kids could do.

My response to this was to say, “But you can’t shoot a cannon even if you wanted to, huh?” He had no comeback.

My friends and I whine about becoming grownups a lot. There’s just so much stuff you have to do and none of it involves cannons.