Well now I live in them. By “live,” I mean “work,” and by “in them,” I mean “in a similarly soothing candy factory, but one in which no one wears purple velvet suits or performs a dance routine when children have potentially fatal mishaps.” 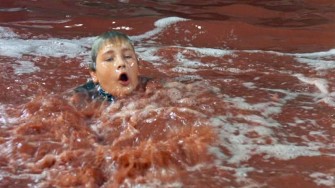 I know this because I was there for Take Your Child to Work Day.

Yep, I have a new job! No cults for me just yet. I’ve left the world of higher education behind and taken a position in an industry that actually makes a positive difference in people’s lives — candy.

It’s great! The people are lovely, the field is interesting, and candy is one of my greatest passions, right behind Owning Cats and Discouraging People from Climbing Mount Everest. Everything is perfect, except for one thing.

I forgot how weird it is to be the new person.

I’ve been the newbie a couple times before, at my previous job and twice in sixth grade, for example. (We moved halfway through the year. I promise I passed sixth grade the first time.) But this time it’s different. Since my last job was at my alma mater, I at least knew my way around. And I was really hoping I’d gotten smoother since sixth grade. No dice.

Since this whole blog is about how suave I am, I’m baffled.

Things I Forgot You Do as the New Person

Surprise! I actually preferred soup to salad THIS WHOLE TIME!

The weirdest part about being new is that it feels like I’m being scrutinized by everyone in the office at all times. I know that’s almost entirely in my head. My co-workers are doing their jobs and not thinking about me until I ask where everyone is getting their coffee. (“What do you mean when you say ‘from the coffee shop directly beneath us where we sell the candy we make here’?”) As long as I don’t set anything on fire or start answering the phone with fart noises, they don’t really care what I do.

I need to relax. It’s not so bad, anyway. Sure, I’m the new girl, but I won’t be as soon as the next open position is filled. Someday I will walk by that person’s desk and ask if we’ve scared them off yet. They will politely laugh, then take the back staircase to avoid future interactions with me. And on that day, I will finally have arrived.