I was home late that night, and wrapping up a phone conversation as I unlocked the door. I heard the click on the other end of the line and stood in my office in the dark for a minute, tired of the grind, tired of people, tired of life. I reached overheard to turn on the light, and there he was, waiting. One foot tall, white socks up to there. Yowza.

I’d seen him around. His name was Winston Purrchill, and he was a cool cat, no question. “Hiya, sweetheart,” I said. “What’s a guy like you doing in a place like this?” 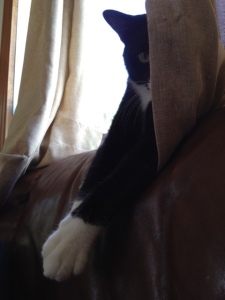 A feline fatale if ever there was one.

He sidled up to me and purred something into my ear. I don’t know what he said. I don’t speak feline. I could see it in his body language, though. Something was wrong. “What’s the matter, honey?” I asked him. “What’s got your tuxedo in a twist?”

That’s when it hit me. Lately, whenever I’d seen Winston I’d spotted a shady character tagging along behind him. A chatty little fella. Went by the name Benito Meowssolini. My roommate had taken him in off the streets a few weeks ago, and since then he’d been making a damned nuisance of himself.

He jumped on Winston any chance he got. He knocked over trash cans and snuck bites of everyone’s food. He galloped across floors at night, or sat on your chest while you were sleeping, kneading and meowing until you had to throw him out of the room. He had a lot of faults, but he was friendly. Cute, even. And now he was nowhere to be seen.

I searched the house, Winston hot on my heels. “Where’s your little friend?” I asked him, but he played coy. I opened doors and looked under furniture. I rattled cans of food and peered into closets, but I didn’t find him. The chill in my bones wasn’t winter coming. Benito was missing. Gone. Sayonara, so long suckers.

I looked down into Winston’s big yellow eyes — eyes that had seen too much. That’s when I swore I’d get to the bottom of this, if it took every last trick in the gumshoe book.

Chapter one is devoted to finding the right trench coat and fedora.

The Facts Are These

1. Both doors to the house were shut when I arrived home at 6pm.

2. Every window in the house is shut.

3. Benito was last seen lying on the kitchen floor around 11am.

4. He had also recently been spotted exploring a dark, inaccessible crawl space in the basement.

“Open and shut,” I said to Winston. “Don’t worry your pretty little head. He’s in the crawlspace doing something annoying, like pooping in a place that will be impossible to clean up.” I got out a ladder and a flashlight to check the space.

“What the…” It was hard to see much besides dirt and dead bugs, but one thing seemed certain: no Benito.

“Meow,” said Winston. He was right. There were things I hadn’t considered.

These Are the Facts

1. Benito spent a lot of time staring out the window at the alley he came from.

2. On two previous occasions, he darted out open doors.

3. One of the doors is tricky — it looks shut but doesn’t always latch completely.

The case had just become much more complicated.

That night, my roommate and I checked the outdoor cat shelters we built and searched the mean city streets, but no dice.

And no cats, either.

We must have seen every other black cat in the neighborhood, but we didn’t find Benito. I tossed and turned that night.

1. Benito himself. Motive: He yearned for freedom? He’s setting up a complicated joke? Insurance fraud?

2. Winston. Motive: It was no secret — Winston and Benito hated each other. Benito tortured Winston, attacking him while he was asleep, eating his food, framing him for peeing in the laundry basket. Had Winston snapped?

3. My roommate, Adrienne. Motive: It was her laundry basket he peed in, her television he was at least partially responsible for breaking. She’d made several jokes about conveniently leaving the door open. Maybe she’d finally gotten serious.

4. Me. Motive: How sure was I that the door had been closed when I got home after work? Was it possible that Benito had slipped through my legs while I was on the phone and distracted? I couldn’t trust my own mind.

5. A burglar who knew exactly what he wanted. Motive: Maybe some sicko is collecting cute things.

I finally shook my head to clear it like some kind of giant Etch-a-Sketch and fell asleep. I spent all my free time the next day pounding the pavement, looking for Benito. I came home that night around six, cold and tired.

I flipped on the kitchen light and saw dozens of tiny, dirty footprints all over the floor. Cat prints. Evidence. Something meowed behind me at the top of the basement stairs and I turned to look, expecting to see Benito there, laughing at me for wasting my time. It wasn’t Benito. It was Winston.

His feet looked all wrong. They’re usually a nice white but now they were dark gray and covered in dust, like he’d been playing in dirt and trying to dig something up. Or tying to bury something.

“Meow,” he said, looking me dead in the eye. My whole body went cold.

It’s been three days and I haven’t seen hide nor hair of Benito Meowssolini. I hope he’s outside. He grew up on the streets and he can stand up for himself. It’s cold out there, but he has food and shelter. Inside? Inside things are a little scarier. I can’t sleep at night anymore. Winston is there, watching. Winston is always there.