I bought an etiquette book last weekend because I’m kind of punk rock.

T.S. Eliot once said, “It’s not wise to violate the rules until you know how to observe them.”

He also said, “After I die, don’t namedrop me in blog posts. It’s pretentious.”

I wholeheartedly subscribe to that school of thought. If I’m going to be a rebel, with or without a cause, I don’t think it’s a bad idea to have a handle on society’s expectations of my behavior. That way I’ll know exactly where a revolutionary attitude will be maximally effective and I won’t waste my iconoclastic rage on stupid things, like insisting I be allowed to wear combat boots to my grandma’s dinner parties.

I actually bought the book because I hoped it would change my life. I don’t think I’m a particularly rude person. I may be less than tactful sometimes, but overall I’m fairly polite. I just think I could reduce the amount of awkward in my life by 6,000% if a book told me what to do in every single gray area. 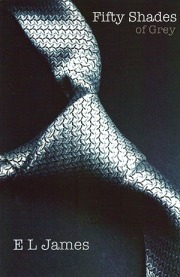 Initially that’s what I thought ‘Fifty Shades of Grey’ was. I was mistaken.

If a side-effect of being less awkward is that I become so polite people suspect me of either being a space alien whose pre-Earth research consisted entirely of watching posh British television dramas, or of being Canadian, so be it.

How to Behave is a little more modern than Emily Post’s offerings. (She gets a lot of flack for that. Poor Emily has been dead for 52 years. Frankly, I’m just impressed she’s still writing.) For each of the given situations (“Dealing with the incessant airplane seat-jiggler”, for example), there’s a chipper, assertive method of handling it (“Say, friend. You’re jiggling my seat every time you pass. I sure don’t like it.”) and a passive-aggressive method (silently stalk them back to their row and bump their seat in return while humming or quietly singing to feign nonchalance. That’ll teach ’em.).

In the case of the incorrigible jiggler (which is, incidentally, also the title of my favorite Nancy Drew book), you’re supposed to demonstrate the effect of seat-jiggling when you confront them by wobbling your head around. In fact, the art of mime seems to be an important component of modern manners. I will now mime a list of situations in which I can use that technique, thanks to my new book: 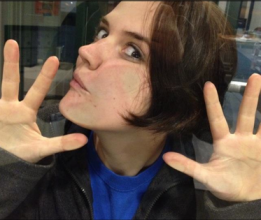 Anyway, How to Behave is a perfectly lovely etiquette guide, but I’m trying to pull out of a hellish, 22-year-long War on Awkward, and I quickly realized this book is not the exit strategy I’d hoped it would be. I need an etiquette book for really specific uncomfortable situations.

Manners for the Maladroit

– What do you do when someone gets on the treadmill next to yours at the gym and starts eyeballing the calories you’ve burned? Rude, right? How do you politely make sure their shoelace gets caught in the belt?

– Is there a good way to eat a corn dog? Do you tackle it straight on? Do you kind of tilt your head like you want to make out with it? Was I supposed to be eating it sideways like corn on the cob this whole time?! Also, someone tell me what to do in one of those situations where you’re eating really hot pizza and you bite some cheese and it pulls all the toppings off with it. You can try to choke down the giant bite of burning pizza toppings and pray no one notices your distress, but someone always does. There has to be a better way!

– What’s the proper technique for gently explaining to people how much you dislike Christmas? For some reason people get really crazy about that. I feel like I’d lose fewer friends every holiday season if I used a little more tact. I wrote a poem about it once, thinking whimsy would help. It did not. I would also like to know the appropriate way to tell people how much I hate Paul McCartney, because covering my ears and screaming when his solo stuff comes on the radio is apparently not it.

– How do you respond when someone shares a link or a video with you on Facebook, and it’s obviously really important to then but its appeal is lost on you? Do you just reply with an emoticon? Because that’s what I’ve been doing.

Does this mean anything? It seems like it should mean something.

– Who can you ask for help when you can’t open your water bottle at work and you want to ask someone with bigger forearms than you, but you also don’t want to come off as anything less than an empowered feminist who doesn’t need a man to keep her hydrated?

– What do you do when you know you’ve put your foot in your mouth the second the words come out? This seems like a good option:

These are the kinds of questions I’d like answered in my ideal etiquette book. If someone could get started on that, I’d be greatly obliged. I’d do it myself, but I have very little interest in writing an autobiography.